In one part of downtown Milan last night, people were falling out of their seats and tearing out their hair in utter boredom. And we’re not talking about a lecture on Biochemistry Engineering at Università Bocconi. Rather, we’re talking about Teatro alla Scala’s open rehearsal of Ildebrando Pizzetti’s Assassinio nella Cattedrale (it opens this coming Friday, and OC heard that it was an absolute snooze-fest). As an antidote, there was something rather unique happening just a few blocks away at Milan’s Conservatorio G. Verdi, as Società del Quartetto presented a concert version of F.J. Haydn’s burletta per musica, L’infedeltà delusa, an endearing & quick opera-lite in two acts for 5 soloists and a small orchestra.

OC chose wisely the latter of the two events, and can report an evening of much needed Haydn opera love.

Haydn’s rather obscure opera — scored to Marco Coltellini’s libretto for the Eszterházy court where Haydn was biding his time as composer, and whose royal family, namesake of the tasty dessert, the work was written for — was premiered in July 1773 and was only heard on three occasions during Haydn’s lifetime. It was written for a party in the royal Eszterházy palace to honor the saint day of the princess Maria Anna Luisa, widow of Paul II Anton.

While the recitative is full of snappy, witty retorts, the arias instead are sumptuous, descriptive, gorgeously harmonic, and gallop the plot throughout Haydn’s theatrical narrative. This is the inception of opera buffa and undoubtedly paved the way for the later genre, and the framework of Rossini’s patented convergences.

There’s a harmonic purity throughout the opera, scored in a major key (with just one aria in a minor key). The arias are well-distributed (with the exception of Vespina’s) between the five singers, and the opera is an absolutely fluid, organic work where the language of the music forms the traditional narrative we’re already accustomed to in Italian opera buffa.

Conductor Hansjoerg Schellenberger led the quaint Haydn Ensemble Berlin — roughly by recollection we had a clavicembalist, half-a-dozen violins, 2 cellos, 1 contrabass, 1 bass, 2 french horns, 2 oboes, 2 bass clarinets, and 1 timpanist — earnestly in a rushed (although at times uneven) display. The overture was a bit squeaky (from the woodwinds and horns), but the orchestra recovered well through the first act. Strings were wholly pristine, and it was refreshing to hear the orchestra in an unamplified venue. But the orchestra lacked the lightness, charm and aloofness that makes Haydn really unique. Tempi and dynamics were skillful, but we wanted more.

The opera’s story is full of social commentary (the power of money, arranged marriages, parental ethics) using Tuscan country peasants as the main characters in a charming pastoral setting, although in this concert setting, our three male singers were impeccable in frac and our two sopranos in dark dresses.

The star of the show was Vespina, the scheming, cunning shepherdess who cleverly steals back her lover (Nencio) from a prearranged marriage to Sandrina. The role was originally written for its first interpretor, Magdalena Frieberth and has great shades of Mozart’s Despina. Vespina needs to be versatile and schizophrenic on stage — playing Vespina herself, an old lady, a German manservant, a stuffy and condescending noble, a valet, and a notary — at times taunting and poking fun at the royal family to which the opera was commissioned without seeming bitter or mocking.

Polish soprano Iwona Sobotka stole the show as Vespina. Her gorgeous, flawless and versatile voice and stage presence made for an effortless performance. She’s got a huge, blinding, solid middle voice that flips into the most delicate and elegant coloratura, wholly light and tranquil, never forced. Her first act aria “Come piglia si bene la mira” was so natural and unaffected, and she sliped into a pure workspace that the other soloists couldn’t even touch. Her recitative was weightless and airy. She easily morphed into her six separate characters and owned each one individually without ever a sense of overbearing. 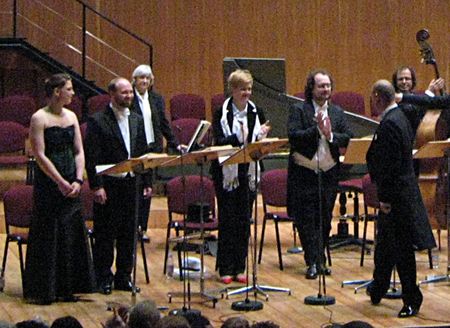 Our two tenors, the Warsaw-born Aleksander Kunach and the Swedish Leif Aruhn-Solén were in good form. Kunach sang Filippo, the father of Sandrina, in a superb understanding of the role. He showed great inflection in his recitative, which manifested as wonderful phrasing and elegant humor suffused in his fairly big voice. He’s got a solid foundation to work with, but does need a bit of polish on his top registers. His gorgeous aria, “Tu sposarti alla Sandrina” was accompanied by lovely tempi from the orchestra and he showed a wonderful range of dynamic. Aruhn-Solén sang Nencio, a well-off farmer and Vespina’s lover. He had a very metallic, delicate, small voice that had a bit of a detachment. But he was able to suffuse a bit of warmth via a skillful vibrato.

Dominik Woerner was the bass, Nanni. We liked him a lot, despite a few faults. His interpretation was way too Italian opera buffa, like he had just jumped from Rossini’s Mustafa or Bartolo. He was a bit too hammy with overworked recitative and breathy passages, which made his arias and spoken parts a bit too uneven. His high notes, while not singing many, were really lovely, although his lowest registers were almost inaudible. His arias worked well because they were much less hammy.

Pacing was hardly a problem for this quicksilver opera, but during the Act II finale, conductor Hansjoerg Schellenberger and the Haydn Ensemble Berlin highlighted their skill of the score’s musical narration. Schellenberger ramped up buidling from mezzopiano to fortissimo in a gorgeous crescendo — adagio to allegro — all for Nanni and Vespian’s final ephiphany of “L’infedeltà” — Deceit outwitted.